The gray wolf (Canis lupus) once occupied nearly all of North America. Wolves, like other large predators in North America, were persecuted shortly after colonization by Europeans began and throughout the settlement period. Gradually, wolves were extirpated from the contiguous 48 states except Minnesota. By the 1930s, wolf populations had disappeared from Montana, Idaho, and Wyoming. A few wolves, apparently long-range dispersers from Canadian populations, were periodically killed in these States. Reproduction did not resume in the western United States until 1986, when dispersing wolves from Canada 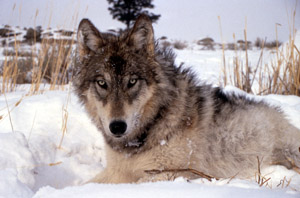 In 1974, the remaining gray wolves in the lower 48 states were protected under the Endangered Species Act (ESA). Thereafter, the U.S. Fish and Wildlife Service (FSW) of the U.S. Department of the Interior appointed a wolf recovery team, which initially recommended that natural dispersal and reintroduction be used to restore wolves to the Northern Rocky Mountain (NRM) region.

In 1987, the Service developed a revised and more specific recovery plan that recommended:

The recovery goal was ten breeding pairs of wolves in each of the three recovery areas (northwestern Montana (NWMT), central Idaho (CID), and the Greater Yellowstone Area (GYA)) for three successive years. Achievement of this goal would be followed by removal of the gray wolf from ESA protection in the NRM region of the United States.

In late 1991, Congress directed the Service to work with the National Park Service and the U.S. Forest Service to prepare an Environmental Impact Statement (EIS) on wolf reintroduction into YNP and Idaho. During the preparation of the EIS, over 130 public meetings were held and some 170,000 comments were received from the public.

In 1994, the final EIS was completed. In it, the Service proposed that wolves be reintroduced into both YNP and central Idaho and designated as "nonessential experimental populations" pursuant to Section 10(j) of the ESA, 16 U.S.C. § 1539(j). This approach, approved by Secretary of the Interior Bruce E. Babbitt in 1994, provided for wolf restoration while allowing management flexibility to deal with concerns of the local public.

On November 25, 1994 -- two days after the final nonessential experimental population rules were published -- several groups filed suit in Federal District Court in Wyoming and sought to halt any reintroduction of wolves by the Service. In December 1994, U.S. District Judge William F. Downes heard legal argument in Cheyenne, Wyoming and, on January 3, 1995, issued an order denying a motion to preliminarily enjoin the reintroduction efforts.

1995. Following the court’s ruling, wolves were captured in Alberta, Canada by an interagency team of about 15 biologists, and 14 wolves were transported to YNP and 15 wolves were transported to central Idaho. Idaho wolves were freed immediately upon arrival, whereas YNP wolves (three family groups) were held in acclimation pens in the park until late March. Most Idaho wolves traveled extensively within the area intended for them. Wolves released into YNP continued to live as packs, stayed closer to their release sites, and settled into home ranges. After five months in the wild, at least 13 of 15 Idaho-released wolves were alive within the intended area, as were 13 of 14 Yellowstone wolves. The progress of the reintroduction program in its first year far exceeded expectations.

In 1996, reintroductions continued, where the Service released an additional 17 wolves from British Columbia into YNP and 20 wolves into central Idaho's Frank Church-River of No Return Wilderness. While the original plan predicted three to five years of releases, only two years were needed due to the success of the initial reintroductions. At the same time that reintroductions were occurring in Idaho and YNP, the northwestern Montana wolf subpopulation was increasing. By August 1996, about 7 breeding pairs and 70 wolves occupied the area where natural recolonization began in the early 1980's.

After 1996, the NRM wolf population grew rapidly. The NRM area has amongst the highest diversity of large predators and native ungulate prey species and contains large blocks of secure habitat (wilderness areas, National Parks, remote public lands) in three core recovery areas. These conditions -- in conjunction with state and Federal management, the high reproductive rate of wolves, wolves natural dispersal abilities, and the ability of wolves to occupy and thrive under a variety of habitat conditions –-resulted in the NRM population increasing at an average rate of 22 percent annually from 1995 to 2008.

The three NRM subpopulations are genetically and demographically connected, constituting a three-part metapopulation. Wolves routinely disperse between all three NRM recovery areas, and dispersing wolves have successfully bred in all three recovery areas. The most distinct subpopulation in the NRM is located in the Greater Yellowstone Area (GYA), but wolves disperse between central Idaho and the GYA, and genetic data show that immigrating wolves from central Idaho have successfully bred in the GYA. In addition, central Idaho and northwestern Montana wolves are connected to the contiguous western Canadian wolf population that contains 12,000 wolves in British Columbia and Alberta.

By the end of 2008, the NRM wolf population occupied nearly all suitable habitats in the NRM area and contained approximately 1,645 wolves in 217 packs (two or more wolves, with an average territory of 200-500 square miles). Ninety-five of these packs also were classified as breeding pairs (a pack that contains at least one adult male and one adult female with two pups on December 31).

The transition from extirpated to recovered wolf population in the NRM within only 20 years is a remarkable wildlife conservation success story. Currently, there are more wolves in more places than originally predicted in 1994. The NRM wolf population represents a 400 mile southern range expansion of a vast contiguous wolf population that numbers of 12,000 wolves in western Canada and about 65,000 wolves across all of Canada and Alaska.

“As long as populations are maintained well above minimum recovery levels, wolf biology (namely the species’ reproductive capacity) and the availability of large, secure blocks of suitable habitat will maintain strong source populations capable of withstanding all other foreseeable threats.” Source: Fish and Wildlife Service (2009).

Following the denial of a preliminary injunction motion, the Federal District Court in Wyoming overseeing the litigation involving the Service’s reintroduction of wolves into YNP and central Idaho held that the reintroduction as an experimental species had been improper and declared that the wolves must be removed from YNP and central Idaho. Wyoming Farm Bureau v. Babbitt, 987 F. Supp. 1349 (D. Wyo. 1997).

The district court, however, stayed its ruling pending review by the Tenth Circuit Court of Appeals. The Tenth Circuit Court thereafter found that the reintroduction was proper and allowed the wolves to remain in the YNP and central Idaho. Wyoming Farm Bureau v. Babbitt, 199 F.3d 1224 (10th Cir. 2000). In its ruling, the Tenth Circuit held that, although non-experimental wolves can enter into central Idaho and YNP, the Service did not violate the ESA’s requirement that experimental populations be “wholly separate geographically” from non-experimental populations. Further, the court held that Service’s treatment of all wolves occurring within the reintroduction area as nonessential experimental animals was proper.

In Gordon v. Norton, 322 F.3d 1213 (10th Cir. 2003), the Tenth Circuit Court of Appeals held that a federal district court does not have subject matter jurisdiction over a Fifth Amendment takings claim arising from damages to plaintiffs' property caused by the Service's wolf recovery program. The court characterized the plaintiffs' claim as one for loss of property and lifestyle due to wolf depredation and ruled that plaintiffs' exclusive remedy was to bring a Tucker Act claim in the U.S. Court of Claims.

Also in 2003, the Service reclassified the gray wolf from endangered to threatened in the newly created Eastern and Western Distinct Population Segments (“DPSs”), and retained the wolf’s endangered status in the Southwestern DPS. The Western DPS encompassed the NRM gray wolves. The rule was subject to litigation and found unlawful by the courts. National Wildlife Federation v. Norton, 386 F.Supp.2d 553 (D. Vt. 2005); Defenders of Wildlife v. Secretary, U.S. Department of the Interior, 354 F.Supp.2d 1156 (D. Or. 2005).

In 2004, the State of Wyoming filed a Misdemeanor Information in the Park County Circuit Court, alleging that a federal employee trespassed and littered on private property in the course of capturing and handling NRM wolves in northeastern Wyoming. The action was removed to federal court and subsequently dismissed on the grounds that the employee was immune from prosecution under the Supremacy Clause of the U.S. Constitution. The Tenth Circuit Court of Appeals affirmed the dismissal, noting that the prosecution of the federal employee was “not a bona fide effort to punish a violation of Wyoming trespass law . . . but rather an attempt to hinder a locally unpopular federal program.” Wyoming v. Livingston, 443 F.3d 1211 (10th Cir. 2006).

In early 2008, the Service removed the NRM wolf population from the ESA’s protections, returning wolf management to the States and Tribes. However, on July 18, 2008, the Federal District Court in Missoula, Montana preliminarily enjoined the delisting and reinstated ESA protections for the NRM wolves. Defenders of Wildlife v. Hall, 565 F.Supp.2d 1160 (D. Mont. 2008). Among other things, the Court was concerned with the Service’s analysis of its recovery criteria and whether there was sufficient genetic exchange occurring between the three NRM wolf subpopulations.

Following additional scientific review and rulemaking, the Service issued a rule in 2009 to remove the NRM wolf population, except for wolves in Wyoming, from the ESA’s protections. Under State management, the regulated hunting of NRM wolves was authorized in Idaho and Montana. The first hunting seasons were set for fall 2009, with state wildlife managers planning to use hunting seasons with quotas to help manage the numbers and distribution of wolves.

Several lawsuits were filed in Montana and Wyoming challenging the rule. On September 9, 2009, the Federal District Court in Missoula, Montana denied a request to enjoin Service’s rule, and the Court allowed Idaho and Montana to continue with the regulated hunting of wolves in those States. Defenders of Wildlife v. Salazar, 09-cv-77 (D. Mont. Sept. 9, 2009).

Following additional scientific review and rulemaking, in September 2012, the Service issued a rule to remove the Wyoming population, thereby fully delisting the NRM wolf population. Environmental groups filed several lawsuits to challenge the Wyoming delisting, two cases in the District of the District of Columbia and one in the District of Colorado. Eventually the two D.C. cases were consolidated in the District of Columbia and the Colorado case transferred to Wyoming and then dismissed. Following the filing of cross motions for summary judgment and a hearing, the D.C. District Court issued an order on September 23, 2014, setting aside the 2012 Rule and reinstating the 2009 Rule (which retained ESA protections for wolves in Wyoming). On March 3, 2017, the D.C. Circuit reversed the district court’s judgment vacating the rule. On April 26, 2017, FWS issued a notice again delisting the species in the state of Wyoming.