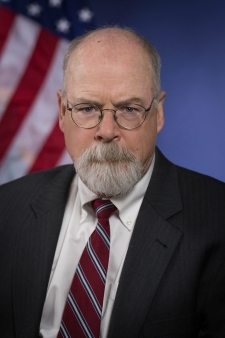 On February 22, 2018, John H. Durham was sworn in as the presidentially appointed United States Attorney for the District of Connecticut.

Mr. Durham had served as the interim U.S. Attorney since October 28, 2017, after U.S. Attorney General Jeff Sessions signed an order appointing him to the position.  President Donald Trump nominated Mr. Durham to serve as U.S. Attorney on November 1, 2017, and the U.S. Senate confirmed his nomination on February 16, 2018.

Prior to his appointment as U.S. Attorney, Mr. Durham served as an Assistant U.S. Attorney in various positions in the District of Connecticut for 35 years, prosecuting complex organized crime, violent crime, public corruption and financial fraud matters.

From 2008 to 2012, Mr. Durham also served as the Acting U.S. Attorney for the Eastern District of Virginia for the purpose of investigating matters relating to the destruction of certain videotapes by the CIA and the treatment of detainees by the CIA.  From 1998 to 2008, Mr. Durham served as a Special Attorney for the District of Massachusetts and Head of the Justice Task Force, where he reviewed alleged criminal conduct by FBI personnel and other law enforcement corruption in Boston, led the prosecution of a former FBI Supervisory Special Agent and a former Massachusetts State Police Lieutenant, and handled direct appeals and related proceedings following convictions after trial.

From 1975 to 1977, Mr. Durham worked as a Volunteer in Service to America (VISTA) on the Crow Indian Reservation in Montana.

Mr. Durham graduated, with honors, from Colgate University in 1972 and the University of Connecticut School of Law in 1975.

Mr. Durham has served as an Instructor in the Criminal Justice Department at the University of New Haven, as a Moot Court Judge at the Yale School of Law, and as a lecturer for the Connecticut Bar Association.

Mr. Durham is the 52nd U.S. Attorney for the District of Connecticut, an office that was established in 1789.