This is archived content from the U.S. Department of Justice website. The information here may be outdated and links may no longer function. Please contact webmaster@usdoj.gov if you have any questions about the archive site.

Courtesy of Helam Gebremariam, Counsel, Office for Access to Justice

One year ago this week, civil unrest broke in Baltimore following the tragic death of Freddie Gray.  In the midst of these events, Baltimore Library Manger Melanie Towsend Diggs made a critically important decision – to keep the Enoch Pratt Free Library open.  In the subsequent days, the library, located in downtown Baltimore – at the very intersection where community members, police and media converged – became a safe space for the community’s organizing, dialogue and healing.  Ms. Diggs’ decision highlighted the vital role that civic institutions, including libraries, play in communities, particularly in times of crisis. 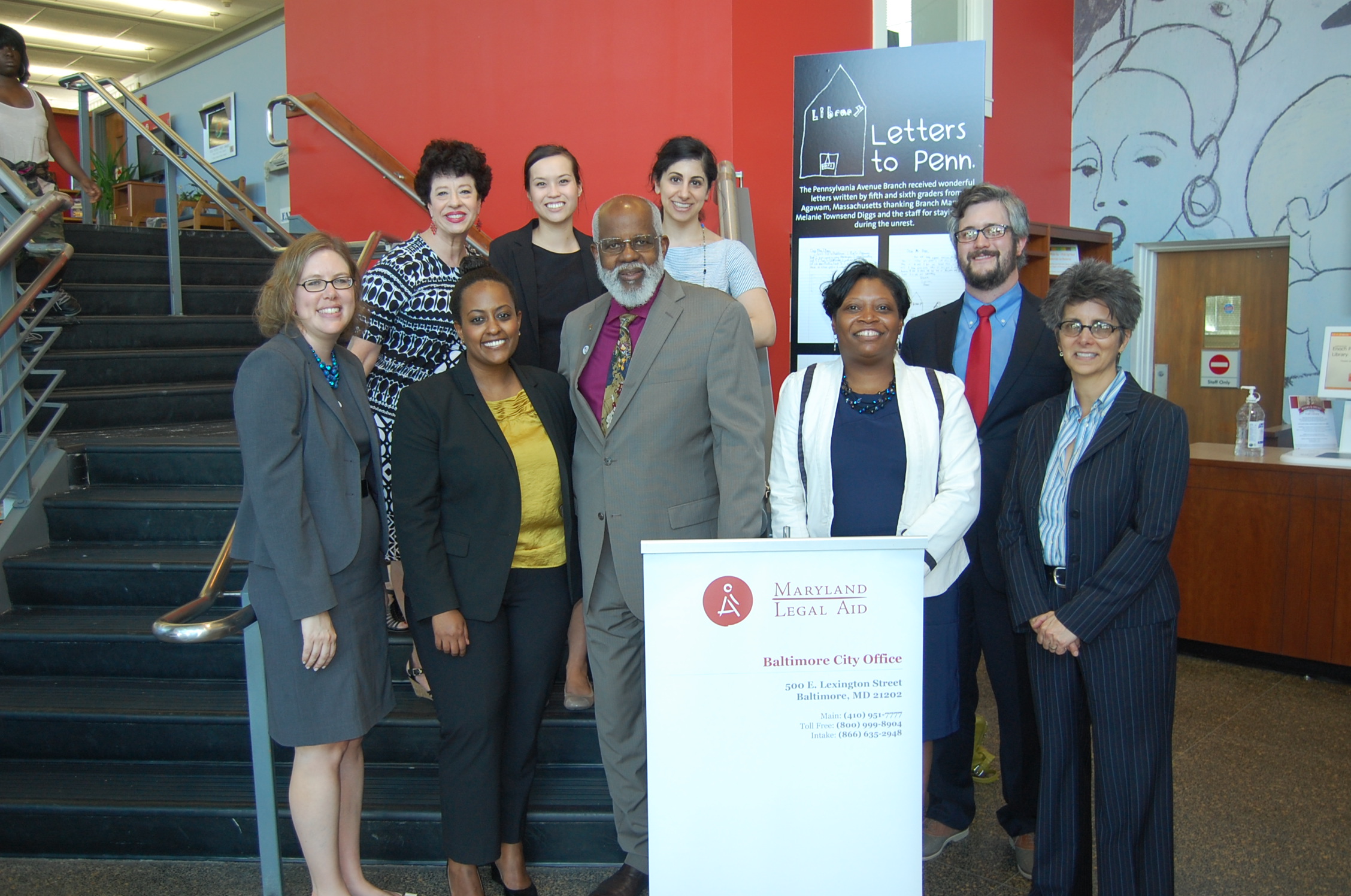 Not long after the unrest, Maryland Legal Aid (MLA), a private, non-profit law firm that provides free legal services to low-income people throughout the state, came to Ms. Diggs with a proposal for collaboration.  Their idea was simple: bring civil legal aid attorneys into the library on a weekly basis to provide free legal services to community members on their civil legal issues.  As part of this new “Lawyer in the Library” project, MLA attorneys come to the library to offer individual consultations on civil legal matters including domestic violence, child support, housing and public benefits issues.  In addition, on one Saturday afternoon per month, the library hosts a clinic dedicated to reentry issues.  During this clinic approximately 15 volunteer attorneys work to help justice-involved individuals and returning citizens expunge their court and police records from public access.  In the past year hundreds of local community members have benefited from this unique partnership.

This week, MLA and the library hosted a “Lawyer in the Library” event in honor of the Justice Department’s inaugural National Reentry Week.  My colleagues at the Office for Access to Justice and I had the privilege of attending this event, which served more than two dozen individuals during the two-hour period.  Events such as these continue to raise awareness about the significant support that civil legal aid provides to low-income and vulnerable populations, including those that are justice-involved.  This is absolutely essential given that research consistently shows that a majority of low- and moderate-income Americans don’t see the issues they’re encountering as legal problems having potential legal solutions.  A family may be concerned about unsafe housing conditions or about a child being expelled from school, but may identify those as personal or social problems rather than as legal issues that a civil legal aid attorney may be able to resolve.  The same is often true for justice-involved individuals and those returning to their communities after serving time: many don’t know that legal aid attorneys can help expunge their criminal records, modify child support orders, reinstate driver’s licenses, prevent illegal evictions and much more.

Increasing federal support of and access to civil legal aid, including for justice-involved and reentering individuals, has been a priority of the Obama Administration, the Justice Department and the Office for Access to Justice.  In 2012, the White House Domestic Policy Council and the Justice launched the Legal Aid Interagency Roundtable (LAIR), which brought together 17 federal agencies to inspire new collaborations to better engage civil legal aid providers as federal granteees, sub-grantees and partners.  In September 2015, President Obama issued a presidential memorandum formally establishing the White House Legal Aid Interagency Roundtable (WH-LAIR), increasing the number of federal partners to 21 and charging the membership to work collaboratively to include civil legal aid in appropriate programs that address vulnerable and under-served populations.

National Reentry Week gives us the opportunity to reflect on the many obstacles that justice-involved individuals and returning citizens face.  It also gives us the opportunity to identify the many human faces of reentry and the diverse array of community partners that dedicate their life and their work to helping people get a fresh start.  Civil legal aid programs and libraries are two important pieces of this puzzle – this “Lawyer in the Library” partnership highlights just that.  Through this collaboration, two institutions that have long lived in the community and reflect the community now partner to serve the community in pursuit of a second chance.

June 22, 2021
22 years ago today, the Supreme Court decided Olmstead v. L.C. , a landmark decision on the rights of people with disabilities.
June 19, 2019
Twenty years ago this week, the Supreme Court issued the groundbreaking decision in Olmstead v. L.C. , holding that unjustified segregation of people with disabilities in institutions is a form of unlawful discrimination under the Americans with Disabilities Act (ADA). This decision led to the development of new opportunities for individuals with disabilities to live and work in their communities. To enforce the holding of Olmstead , the Department of Justice has addressed the unnecessary segregation of people with physical, mental health, or intellectual and developmental disabilities (I/DD) in various residential and non-residential settings, nationwide. Nearly 50,000 people benefit from statewide settlements giving them the opportunity to receive health, residential, employment, and day services in their communities and, where appropriate and consistent with their informed decision, to leave, or avoid entering, segregated institutions.
October 5, 2021
Courtesy of Lisa O. Monaco, Deputy Attorney General
Our government has a moral obligation to protect its citizens, and when it falls short of doing that, it must listen to those it let down to learn how to do better
August 5, 2022
Courtesy of Assistant Attorney General Kristen Clarke
On August 6, 1965, President Lyndon B. Johnson signed the Voting Rights Act of 1965 into law.
END_OF_DOCUMENT_TOKEN_TO_BE_REPLACED