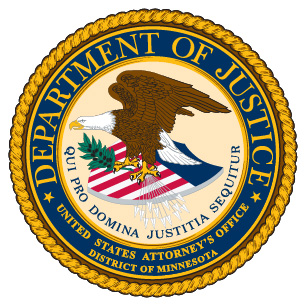 "The United States Attorney is the representative not of an ordinary party to a controversy, but of a sovereignty whose obligation to govern impartially is as compelling as its obligation to govern at all; and whose interest, therefore, in a criminal prosecution is not that it shall win a case, but that justice be done. As such he is in a peculiar and very definite sense the servant of the law, the twofold aim of which is that guilt shall not escape or innocence suffer. He may prosecute with earnestness and vigor -- indeed he should do so. But, while he may strike hard blows, he is not at liberty to strike foul ones. It is as much his duty to refrain from improper methods calculated to produce a wrongful conviction as it is to use every legitimate means to bring about a just one."
-- Mr. Justice Sutherland in Berger v. United States, 295 U.S. 88 (1935)

The U.S. Attorney is appointed by the President of the United States for a term of four years, with appointments subject to confirmation by the Senate. A U.S. Attorney shall continue in office beyond the appointed term until a successor is appointed and qualified.

Minnesota was established as a territory and federal judicial district by the Congress of the United States on March 17, 1849. Two days later, Henry L. Moss was appointed its first U.S. Attorney by President Zachary Taylor and served for the first time in this position until 1853. Like several of his successors, Moss was re-appointed U.S. Attorney in 1863 and served until 1868. Since that time, the District's thirty-five (35) U.S. Attorneys have worked hard to uphold the laws of this nation and protect the rights and safety of the citizens of Minnesota.

Presently, approximately 130 people, including more than sixty-five (65) Assistant U.S. Attorneys, work in the U.S. Attorney's Office in the District of Minnesota. The Office headquarters is in the federal courthouse in Minneapolis, and a branch office is maintained in St. Paul.

Functionally, the U.S. Attorney's Office in the District of Minnesota is divided into four divisions: a criminal division, civil division, appellate division, and administrative division.

The mission of the United States Attorney's Office for the District of Minnesota is to ensure that we provide the United States of America with high quality and professional legal representation, maintaining the highest ethical standards and, at all times, pursuing justice. We are wholly committed to the promotion of the public good and the safety of our community. Within this broader mission, we recognize that our primary responsibilities include: