Eight individuals who allegedly engaged in various deceptive trading practices on commodities markets in the United States have been publicly charged with federal crimes.  Seven of the eight individuals were charged with the crime of spoofing, an illegal trading practice that can be used to manipulate the commodities markets.  Other than the individuals identified today, only three other individuals have ever been publicly charged with the crime of spoofing.  Of those identified today, five were traders employed by global financial institutions, two were traders at large commodities trading firms, and one was the owner of a technology consulting firm. 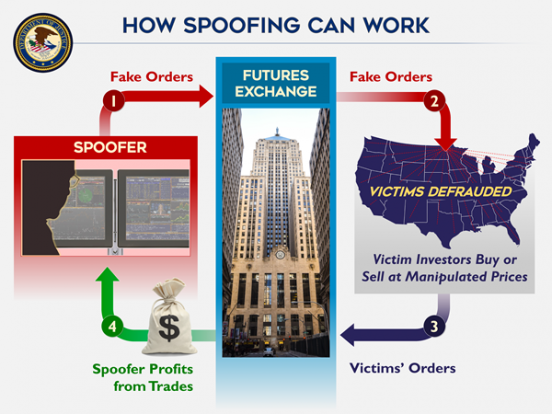 The charges announced today aggressively target, among other things, the practice of spoofing, which was allegedly employed in various forms by these defendants and/or their co-conspirators to manipulate the market for futures contracts traded on the Chicago Mercantile Exchange (CME), the Chicago Board of Trade (CBOT), and the Commodity Exchange Inc. (COMEX).  The defendants and their co-conspirators are alleged to have defrauded market participants and manipulated these markets by placing hundreds, and in some cases, thousands of orders that they did not intend to trade, or “spoof orders,” to create the appearance of substantial false supply and demand and to induce other market participants to trade at prices, quantities, and times that they otherwise would not have traded.  According to the charging documents, the spoof orders often had the effect of artificially depressing or artificially inflating the prices of futures contracts traded on CME, CBOT, and COMEX.  In order to take advantage of the artificial price levels created by their spoof orders, the defendants and/or their co-conspirators are alleged to have executed real, genuine orders to buy (at the artificially low prices) or to sell (at the artificially high prices) in order to generate trading profits or to illicitly mitigate other trading losses.

“As alleged, the defendants in these cases engaged in sophisticated schemes or trading practices aimed at defrauding individuals and entities trading on U.S. futures exchanges,” said Acting Assistant Attorney General Cronan.  “Conduct like this poses significant risk of eroding confidence in U.S. markets and creates an uneven playing field for legitimate traders and investors.  The Department and our law enforcement partners will use all of the tools at our disposal, including cutting-edge data analysis, to detect these types of schemes and to bring those who engage in them to justice.  Protecting the integrity of our markets remains a significant priority in our fight against economic crime.”

“The FBI has taken enforcement action against multiple commodities traders who, for their own personal gain, were spoofing trades through electronic trading platforms,” said Deputy Assistant Director Chris Hacker.  “Their deceptive trading artificially affected the perception of supply and demand in the market and took away a level playing field for investors.  We ask for those who observe indicators of this type of fraud to come forward to law enforcement so that we can stop those who attempt to exploit our financial system.”

“Spoofing is a particularly pernicious example of bad actors seeking to manipulate the market through the abuse of technology,” said Director McDonald.  “The technological developments that enabled electronic and algorithmic trading have created new opportunities in our markets.  At the CFTC, we are committed to facilitating these market-enhancing developments.  But at the same time, we recognize that these new developments also present new opportunities for bad actors.  We are equally committed to identifying and punishing these bad actors.  The CFTC’s enforcement program is built around the twin goals of holding wrongdoers accountable and deterring future misconduct.  We believe these goals are best achieved when we hold accountable not just companies, but also the individuals involved.  As these cases show, we will work hard to identify and prosecute the individual traders who engage in spoofing, but we will also seek to find and hold accountable those who teach others how to spoof, who build the tools designed to spoof, or who otherwise aid and abet the wrongdoing.  These cases should send a strong signal that we at the CFTC are committed to identifying individuals responsible for unlawful activity and holding them accountable.”

Six individuals have been charged in four cases with spoofing and/or manipulative conduct charged in the Northern District of Illinois including:

A complaint, information, or indictment is merely an allegation, and all defendants are presumed innocent until proven guilty beyond a reasonable doubt in a court of law.

Individuals who believe that they may be a victim in these cases should visit the Fraud Section’s Victim Witness website or call 889-549-3945 for more information.

To obtain information on the CFTC’s resolutions with three global financial institutions, please go to: http://www.cftc.gov/PressRoom/PressReleases/index.htm.