Spokane – On December 7, 2022, U.S. District Judge Thomas O. Rice sentenced Trever Daniel Harder, 35, of Spokane, to 27 years in prison for engaging in the sex trafficking of a six-year-old girl. Upon his release from prison, Harder will be on federal supervision for the remainder of his life, and he will be required to register as a sex offender. The Court also ordered Harder to pay nearly $30,000 in restitution, along with a $5,000 special assessment pursuant to the Justice for Victims of Trafficking Act.

According to court documents and proceedings, Harder met an adult woman online in early 2021 using the social media application “Plenty of Fish.” Within days, Harder sought out sexual contact with a minor child to whom the adult woman had access. Harder and the adult woman negotiated a series of transactions in which Harder gained sexual access to the child by providing the adult woman with a place to stay, cash, and the promise of new Nike sneakers. Harder then engaged in illicit sexual acts with the minor victim. Earlier this year, the adult woman was convicted of conspiracy to engage in the sex trafficking of a child, and Judge Rice imposed a multi-decade sentence on her, as well.

“Today the Court addressed the egregious sexual abuse of a child. Its sentence is significant, but it pales in comparison to what the child has endured,” said Vanessa R. Waldref, United States Attorney for the Eastern District. “No sentence can return the child’s innocence, but our community is safer and stronger with these two defendants in federal prison. Most important, the child is now in a safe place.” U.S. Attorney Waldref emphasized the vigilance with which law enforcement protects children from sexual harm: “My office will continue to prioritize cases involving individuals who seek to exploit and abuse children online or in person.”

David M. Herzog, the Assistant United States Attorney who prosecuted the case, thanked the agencies responsible for the investigation and the protection of the young victim. “Incredibly dedicated FBI agents worked hand-in-hand with state, local, and tribal law enforcement to secure justice for the victim in this case and to protect this child from further sexual abuse.”

“The defendant’s conduct in this case was horrific,” said Richard A. Collodi, Special Agent in Charge of the FBI’s Seattle field office. “I commend the professionalism and dedication of our investigators and partners, who sought justice for a child who could not seek it on her own.”

This case was pursued as part of Project Safe Childhood, a nationwide initiative launched in May 2006 by the United States Department of Justice to combat the growing epidemic of child sexual exploitation and abuse. For more information about Project Safe Childhood, please visit www.usdoj.gov/psc. For information about internet safety education, please visit www.usdoj.gov/psc and click on the tab “resources.”

This case was investigated by the FBI’s Spokane Resident Office and the Spokane Police Department, with significant assistance from the Quileute Nation. The case was prosecuted by David M. Herzog, Assistant United States Attorney for the Eastern District of Washington. 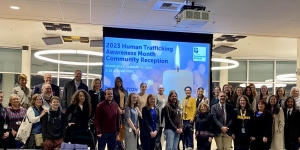