According to court documents, between October 2016 and November 2017, Shani conspired to launder the proceeds of an illegal gambling business with Atir Dadon, 34, of Sherman Oaks, and Orel Gohar, 28, of San Francisco. Orel Gohar and Yaniv Gohar, 35, of Berkeley, operated an illegal gambling business that placed and maintained video slot machines at businesses in Northern California, including locations in the Eastern District of California. Shani, Dadon, and Orel Gohar agreed that Orel Gohar would give cash proceeds from the Gohars’ gambling business to Shani and Dadon, who would use the cash to pay the workers in their cosmetics business. They agreed that Orel Gohar would give cash to Shani and Dadon, and in return, they would arrange for Orel Gohar to receive checks from the cosmetics business. To conceal the fact that the financial transactions involved the proceeds of illegal activity, Shani, Dadon, and Orel Gohar used code words in their conversations about the transactions, referring to the money as bottles of alcohol or other non‑cash items. Dadon also put false memo lines on the checks, indicating that Orel Gohar had provided consulting and training services, when in fact he had not done so. Between October 2016 and November 2017, Shani and Dadon laundered $159,900 from the Gohars’ gambling business.

This case is the product of an investigation by the Federal Bureau of Investigation and the California Department of Justice – Bureau of Gambling Control. Assistant U.S. Attorneys Matthew M. Yelovich and Miriam R. Hinman are prosecuting the case.

Co-defendants Yaniv Gohar and Orel Gohar fled the United States upon their release in December 2017 and remain at large. Anyone with information about their whereabouts should call the Federal Bureau of Investigation at (916) 746-7000.

Co-defendant Raz Razla, 48, of Sherman Oaks, is charged with making false statements to the grand jury. Co-defendant Eran Buhbut, 33, of Oakland, is charged with operating an illegal gambling business. These charges are only allegations; the defendants are presumed innocent until and unless proven guilty beyond a reasonable doubt. If convicted, these remaining defendants face a statutory maximum penalty of 5 years in prison and a fine of up to $250,000, or both. The actual sentences, however, will be determined at the discretion of the court after consideration of any applicable statutory factors and the Federal Sentencing Guidelines, which take into account a number of variables. 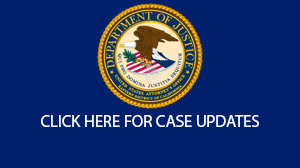 REPORT FRAUD FROM THE CALIFORNIA FIRES

Afraid your child is being bullied or is bullying others?
Find helpful resources at: www.stopbullying.gov

Ensuring that victims of federal crimes are treated with compassion, fairness, and respect.

Find helpful resources to prevent and respond to elder abuse.