NEW BERN - United States Attorney Thomas G. Walker announced that in federal court today MEREDITH CLIFTON COOK, 47, was sentenced by Federal District Court Judge Louise W. Flanagan to 540 months imprisonment followed by a lifetime of supervised release and a fine of $50,000 for two counts of producing child pornography.
U.S. Attorney Thomas G. Walker commented, “This is one of the worst cases of child sexual abuse and exploitation ever discovered in our district,” said Walker. “To sexually abuse the most helpless of children and then share that abuse with the world is conduct that cannot and should not be tolerated.”
Two separate offices of the Federal Bureau of Investigation – one in Charlotte, the other in Houston, Texas – developed leads in June of 2011 that an individual later determined to be COOK was engaged in trading child pornography over a peer-to-peer network frequented by child pornography traffickers.  Investigators traced the account to Jamesville, North Carolina, leading to a search in November of 2011.  Investigators discovered that COOK had amassed a massive library of multiple hundreds of thousands of child pornography images and videos and that he had been actively talking about his interest in the sexual abuse of infants online.  After the initial search, investigators discovered that COOK had recorded his own sexual abuse of multiple children and redistributed the images over the internet.  The victims were all younger than 7 years of age.
This case was part of the Project Safe Childhood initiative, a national program aimed at ensuring that criminals exploiting children are effectively prosecuted by making full use of all available law enforcement resources at every level.  For more information about this important national project, Project Safe Childhood, go to www.projectsafechildhood.gov. 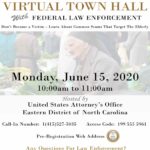