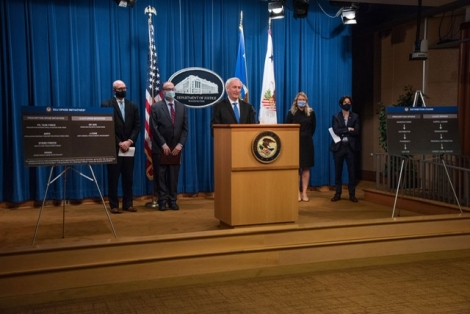 “The abuse and diversion of prescription opioids has contributed to a national tragedy of addiction and deaths, in addition to those caused by illicit street opioids,” said Deputy Attorney General Jeffrey A. Rosen.  “With criminal guilty pleas, a federal settlement of more than $8 billion, and the dissolution of a company and repurposing its assets entirely for the public’s benefit, the resolution in this week’s announcement re-affirms that the Department of Justice will not relent in its multi-pronged efforts to combat the opioids crisis.”

“This resolution is the result of years of hard work by the FBI and its partners to combat the opioid crisis in the U.S.,” said Steven M. D’Antuono, Assistant Director in Charge of the FBI Washington Field Office.  “Purdue, through greed and violation of the law, prioritized money over the health and well-being of patients.  The FBI remains committed to holding companies accountable for their illegal and inexcusable activity and to seeking justice, on behalf of the victims, for those who contributed to the opioid crisis.”

“The opioid epidemic remains a significant public health challenge that impacts the lives of men and women across the country,” said Gary L. Cantrell Deputy Inspector General for Investigations at the U.S. Department of Health and Human Services’ Office of Inspector General.  “Unfortunately, Purdue’s reckless actions and violation of the law senselessly risked patients’ health and well-being.  With our law enforcement partners, we will continue to combat the opioid crisis, including holding the pharmaceutical industry and its executives accountable.”

“This resolution closes a particularly sad chapter in the ongoing battle against opioid addiction,” said Drug Enforcement Administration (DEA) Assistant Administrator Tim McDermott.  “Purdue Pharma actively thwarted the United States’ efforts to ensure compliance and prevent diversion.  The devastating ripple effect of Purdue’s actions left lives lost and others addicted.  DEA will continue to work tirelessly with our partners and the pharmaceutical industry to address the damage that has been done, and bring an end to this epidemic that has gripped the nation for far too long.”

Purdue Pharma has agreed to plead guilty in federal court in New Jersey to a three-count felony information charging it with one count of dual-object conspiracy to defraud the United States and to violate the Food, Drug, and Cosmetic Act, and two counts of conspiracy to violate the Federal Anti-Kickback Statute.  The criminal resolution includes the largest penalties ever levied against a pharmaceutical manufacturer, including a criminal fine of $3.544 billion and an additional $2 billion in criminal forfeiture.  For the $2 billion forfeiture, the company will pay $225 million on the effective date of the bankruptcy, and, as further explained below, the department is willing to credit the value conferred by the company to State and local governments under the department’s anti-piling on and coordination policy.  Purdue has also agreed to a civil settlement in the amount of $2.8 billion to resolve its civil liability under the False Claims Act.  Separately, the Sackler family has agreed to pay $225 million in damages to resolve its civil False Claims Act liability.

The resolutions do not include the criminal release of any individuals, including members of the Sackler family, nor are any of the company’s executives or employees receiving civil releases.

While the global resolution with the company is subject to approval by the bankruptcy court in the Southern District of New York, one important condition in the resolution is that the company would cease to operate in its current form and would instead emerge from bankruptcy as a public benefit company (PBC) owned by a trust or similar entity designed for the benefit of the American public, to function entirely in the public interest.  Indeed, not only will the PBC endeavor to deliver legitimate prescription drugs in a manner as safe as possible, but it will aim to donate, or provide steep discounts for, life-saving overdose rescue drugs and medically assisted treatment medications to communities, and the proceeds of the trust will be directed toward State and local opioid abatement programs.  Based on the value that would be conferred to State and local governments through the PBC, the department is willing to credit up to $1.775 billion against the agreed $2 billion forfeiture amount.  The department looks forward to working with the creditor groups in the bankruptcy in charting the path forward for this PBC so that its public health goals can be best accomplished.

As part of the plea, Purdue will admit that from May 2007 through at least March 2017, Purdue conspired to defraud the United States by impeding the lawful function of the DEA by representing to the DEA that Purdue maintained an effective anti-diversion program when, in fact, Purdue continued to market its opioid products to more than 100 health care providers whom the company had good reason to believe were diverting opioids and by reporting misleading information to the DEA to boost Purdue’s manufacturing quotas.  The misleading information comprised prescription data that included prescriptions written by doctors that Purdue had good reason to believe were engaged in diversion.  The conspiracy also involved aiding and abetting violations of the Food, Drug, and Cosmetic Act by facilitating the dispensing of its opioid products, including OxyContin, without a legitimate medical purpose, and thus without lawful prescriptions.

In addition, Purdue will admit to conspiring to violate the Federal Anti-Kickback Statute.  Between June 2009 and March 2017, Purdue made payments to two doctors through Purdue’s doctor speaker program to induce those doctors to write more prescriptions of Purdue’s opioid products.  Similarly, from approximately April 2016 through December 2016, Purdue made payments to Practice Fusion Inc., an electronic health records company, in exchange for referring, recommending, and arranging for the ordering of Purdue’s extended release opioid products – OxyContin, Butrans, and Hysingla.

The department’s civil settlements resolve the United States’ claims as to both Purdue and its individual shareholders, members of the Sackler family.

The civil settlement with Purdue provides the United States with an allowed, unsubordinated, general unsecured bankruptcy claim for recovery of $2.8 billion.   This settlement resolves allegations that from 2010 to 2018, Purdue caused false claims to be submitted to federal health care programs, specifically Medicare, Medicaid, TRICARE, the Federal Employees Health Benefits Program, and the Indian Health Service.  The government alleged that Purdue promoted its opioid drugs to health care providers it knew were prescribing opioids for uses that were unsafe, ineffective, and medically unnecessary, and that often led to abuse and diversion.  For example, Purdue learned that one doctor was known by patients as “the Candyman” and was prescribing “crazy dosing of OxyContin,” yet Purdue had sales representatives meet with the doctor more than 300 times.  It also resolves the government’s allegations that Purdue engaged in three different kickback schemes to induce prescriptions of its opioids.  First, Purdue paid certain doctors ostensibly to provide educational talks to other health care professionals and serve as consultants, but in reality to induce them to prescribe more OxyContin.  Second, Purdue paid kickbacks to Practice Fusion, as described above.  Third, Purdue entered into contracts with certain specialty pharmacies to fill prescriptions for Purdue’s opioid drugs that other pharmacies had rejected as potentially lacking medical necessity.

Under a separate civil settlement, individual members of the Sackler family will pay the United States $225 million arising from the alleged conduct of Dr. Richard Sackler, David Sackler, Mortimer D.A. Sackler, Dr. Kathe Sackler, and Jonathan Sackler (the Named Sacklers).  This settlement resolves allegations that, in 2012, the Named Sacklers knew that the legitimate market for Purdue’s opioids had contracted.  Nevertheless, they requested that Purdue executives recapture lost sales and increase Purdue’s share of the opioid market.  The Named Sacklers then approved a new marketing program beginning in 2013 called “Evolve to Excellence,” through which Purdue sales representatives intensified their marketing of OxyContin to extreme, high-volume prescribers who were already writing “25 times as many OxyContin scripts” as their peers, causing health care providers to prescribe opioids for uses that were unsafe, ineffective, and medically unnecessary, and that often led to abuse and diversion.

The civil settlement also resolves the government’s allegations that from approximately 2008 to 2018, at the Named Sacklers’ request, Purdue transferred assets into Sackler family holding companies and trusts that were made to hinder future creditors, and/or were otherwise voidable as fraudulent transfers.

This week’s resolution does not resolve claims that states may have against Purdue or members of the Sackler family, nor does it impede the debtors’ ability to recover any fraudulent transfers.

Except to the extent of Purdue’s admissions as part of its criminal resolution, the claims resolved by the civil settlements are allegations only.  There has been no determination of liability in the civil matters.