Damian Williams, the United States Attorney for the Southern District of New York, Michael J. Driscoll, the Assistant Director-in-Charge of the New York Office of the Federal Bureau of Investigation (“FBI”), and Keechant L. Sewell, the Commissioner of the New York City Police Department (“NYPD”), announced the unsealing today of a three-count Indictment charging ERIC LESANE with firearms and drug trafficking offenses.  LESANE was initially charged by Complaint after his arrest on February 1, 2022.  LESANE’s case has been assigned to the Honorable U.S. District Judge Alison J. Nathan.

Michael J. Driscoll, FBI Assistant Director-in-Charge said: “Mr. Lesane was aware of the conditions attached to his release from prison – he was not allowed to purchase or maintain a firearm.  We allege he possessed several, one of which was an untraceable ghost gun - a class of weapon that poses an increasing threat to our communities. Our goal is to work with our law enforcement partners to get criminals and their weapons off our streets.”

NYPD Commissioner Keechant L. Sewell said: “Convicted previously in a firearms possession case, Eric Lesane now faces federal indictment for allegedly amassing a stockpile of weapons — including an untraceable ghost gun — while on supervised release. Our NYPD investigators, working with our partners and prosecutors in the United States Attorney’s Office, will never stop pursuing these kinds of cases in our continuing effort to eradicate gun violence in New York.”

According to the allegations in the Indictment unsealed today in Manhattan federal court and in the Complaint and statements made in open Court:

(4) a Typhoon 12 Gauge Semiautomatic Shotgun, and

(5) a black pf940c polymer 80 privately made handgun with no serial number—in other words, a “ghost” gun.

A photograph of the guns is below: 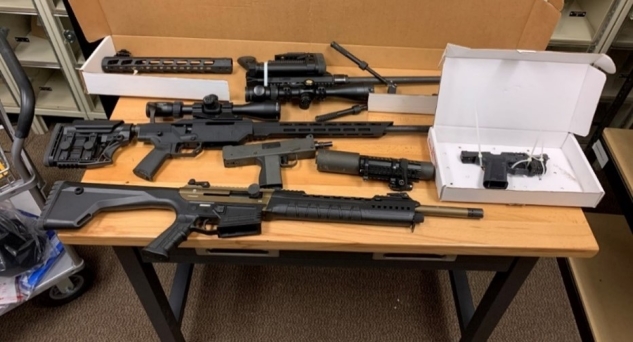 In the course of the search, Probation Officers also recovered multiple high-capacity magazines each containing more than 15 rounds of ammunition, approximately 75 buckshot shotgun shells, additional ammunition, and a quantity of marijuana.

Probation Officers also found large amounts of paraphernalia that appears to be associated with the “Crips” street gang, including blue clothing and signs, literature that discusses the Crips, and a black and blue baseball bat with a black and blue bandana tied around it, wrapped in barbed wire.

The prosecution is being handled by the Office’s Violent & Organized Crime Unit.  Assistant United States Attorney Elizabeth A. Espinosa is in charge of the prosecution.

The charges contained in the Indictment are merely accusations, and the defendant is presumed innocent unless and until proven guilty.

This Office was one of the districts affected by the SolarWinds intrusion.