There are three main levels to the federal court system:

There are 94 District Courts throughout the United States and its territories. The federal district court is the starting point for any case concerning federal law, the Constitution, or treaties. The district courts are the trial courts of the federal court system and handle criminal and civil trials.

Each district court has at least one United States District Court Judge, appointed by the President and confirmed by the Senate for a life term.

Each district has a corresponding United States Attorney, who is appointed by the President and confirmed by the Senate. The 93 U.S. Attorneys are the federal government's chief prosecutor in each of the 94 districts (there is one U.S. Attorney for Guam and the Northern Marianas).

*Please Note: The U.S. Attorneys and all federal prosecutors are part of the Executive Branch, while the judges and members of the Courts are part of the Judicial Branch. For more on the Three Branches of Government, see bottom of this page.

There are 13 Courts of Appeals, a/k/a appellate courts, that sit below the U.S. Supreme Court. The appellate court’s task is to determine whether or not the law was applied correctly in the trial court. Appeals courts consist of three judges and do not use a jury. A court of appeals hears challenges to district court decisions from courts located within its circuit, as well as appeals from decisions of federal administrative agencies.

The Supreme Court of the United States

There is one Supreme Court in the United States, and it is the country's highest court. It is the final level of appeal in the federal system.

For more information on the federal court system visit Justice 101: Introduction to the Federal Court System and also About Federal Courts: Court Role and Structure.

appeal
A request made after a trial, asking another court (usually the court of appeals) to decide whether the trial was conducted properly. To make such a request is "to appeal" or "to take an appeal." Both the plaintiff and the defendant can appeal, and the party doing so is called the appellant. Appeals can be made for a variety of reasons including improper procedure and asking the court to change its interpretation of the law.
arraignment
A proceeding that occurs after indictment in which an individual who is accused of committing a crime is brought into court, told of the charges, and asked to plead guilty or not guilty.
complaint
A written statement by the plaintiff stating the wrongs allegedly committed by the defendant.
grand jury
A body of citizens who listen to evidence of criminal allegations, which are presented by the government, and determines whether there is probable cause to believe the offense was committed. As it is used in federal criminal cases, "the government" refers to the lawyers of the U.S. Attorney's office who are prosecuting the case. Grand jury proceedings are closed to the public, and the person suspected of having committed the crime is not entitled to be present or have an attorney present. States are not required to use grand juries, but the federal government must do so under the Constitution.
indictment
The formal charge issued by a grand jury stating that there is enough evidence that the defendant committed the crime to justify having a trial; it is used primarily for felonies.
information
A defendant can waive his Fifth Amendment right to a grand jury indictment and be charged by information. After a prosecutor signs the information and files it in court, the defendant appears in court, waives his right to an indictment, and usually pleads guilty shortly thereafter.
initial appearance
Court proceeding in which the defendant learns of his rights and the charges against him and the judge decides bail. Occurs after being charged by complaint or indictment.
preliminary hearing
A hearing where the judge decides whether there is enough evidence to require the defendant to go to trial. Preliminary hearings do not require the same rules as trials. For example, hearsay is often admissible during the preliminary hearing but not at trial.
probable cause
An amount of suspicion leading one to believe certain facts are probably true. The Fourth Amendment requires probable cause for the issuance of an arrest or search warrant.
superseding indictment
An indictment that replaces a previous indictment. 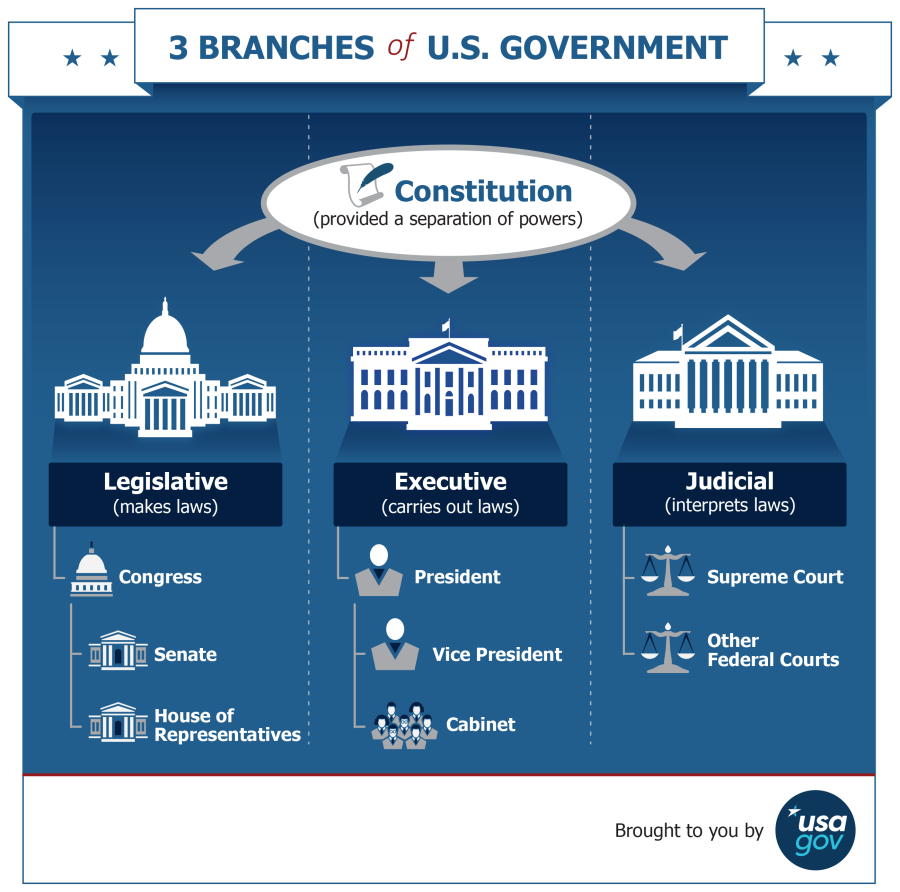 The Three Branches of the United States Government

There are three separate branches of government, all equal in power.

The Judicial Branch
The Federal Courts and their judges
The Executive Branch
The President and his cabinet, such as, the Attorney General - the head of the Department of Justice
The Legislative Branch
The United States Congress, made up of the Senate (100 senators; two from each state) and the House of Representatives (made up of 435 congressmen and women).